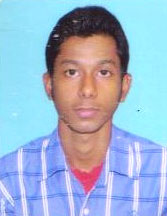 Amit works at an IGCSM training centre in New Delhi. He is a confident 20 years old, who shares the financial responsibility of their household, along with his father. His mother is very proud of her son. She has a gleam in her eyes and wears a smile all the time. She is no longer worried about her son. She is no longer afraid, of what her son might do to himself while she is not with him.

It was only a while back, when Amit was pretty much fed up of his life, of his being what he is and where he is. After completing his 12th grade, he was clueless about what he would do next. He knew that his father, with his meagre salary, would not be able to support any further education. They after all, could barely manage the basic household needs with his father’s salary.

His stress added to his parents worries. Trivial issues started becoming reasons for major arguments and only added to the stress and unrest. More than a year went by like that and Amit who was once quite close to he parents started distancing himself. He knew there was hardly anything his parents could do to help him, but kept on blaming them and his destiny for his difficulties. He had given up hope that anything good could happen to him.

This was when he learnt about the IGCSM training centre in Kalkaji. He enrolled there for a course in ADHNT. He could now see a future for himself. He became the most enthusiastic student of his batch. After he completed his course, he was offered a job at one of the training centres of IGCSM in New Delhi. He took that job and has been working there for a couple of months now.

He is happy. He earns a decent salary. His father is proud, that his son earns as much as he does. Amit wants to buy a motorbike next, so he can drop and pick up his father from work everyday. He wants to buy a washing machine for his mother. He also wants to become a hardware engineer, and is planning to start studying for it in six months.

Amit is glad, he found his hope again.

Prerana’s life was as ordinary as it could have been for a girl in her town. She went to school. Finished her 12th grade.