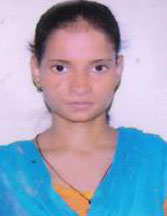 One will normally find a serious look on Tanu’s face. But she has the most beautiful smile. And the best part is, her eyes smile at you too. Tanu is an assistant computer teacher at an established training centre in her little town. While she always liked to take control of things, little had she known, that she would be able to control her own life, like she has now.

Tanu is the eldest of three sisters in her family. Her father is a small time contractual employee and her mother sews clothes for people in the neighbourhood and manages to support him in earning for the family. Tanu and her sisters help their mother in collecting, executing and delivering the tailoring orders. The three of them also share and do the household chores. The parents ensured that all the three girls get their school education, but only wanted to get them married off just when they were of age. Primarily because they barely could make ends meet with their income and had the huge task of saving for the daughters’ marriages. Their plan was quite set, until Tanu upturned all of it.

Tanu had seen how her friends suffered after being married off early. So, she refused to be married off, when it was her turn. She had to put up quite a fight against her parents to make herself heard. Thanks to her sisters, who stood by her, the whole time. Her parents finally gave in and asked her what she wanted. She mentioned she wanted to study computers and become a computer teacher herself. She enrolled in a local IGCSM centre and completed an advanced diploma. Following which she found her current job.

She has been working here for just over a year now. She feels proud to be a teacher, not only because she is able to add to the family income. She says with this job she gets an opportunity to help many girls like herself, in giving them a direction to move forward in their lives. Her younger sister is also studying computer in the IGCSM centre, where Tanu went for her course. The youngest one is still in school and will surely go there for her computer training once she finishes school.

Tanu loves cooking and manages to find time to cook for the family even now. When asked if she is ready to get married now, she smiles her beautiful smile and says no. Never !

Prerana’s life was as ordinary as it could have been for a girl in her town. She went to school. Finished her 12th grade.